Swarms - What To Do

Do you think you have a swarm of bees?

Beekeepers are often approached about winged, flying creatures, especially in the spring and summer period, when they are their most active and are no cause for alarm.
Beekeepers are ONLY able to help with swarms of honey bees we are not able to respond to calls about wasps or bumble bees.
Please follow this link to the BBKA Swarm Identification to confirm you have a swarm of honey bees before contacting us.
Swarming is the natural process by which colonies of honey bees increase their numbers.  If you see a swarm please refer to the with a postcode to the directory below.

The characteristic loud hum from a swirling swarm of bees is one of nature’s striking phenomena. A swarm commonly settles as a ball hanging from a bush or tree before moving on when a new permanent nest site has been found.

Left alone, a swarm is quite harmless, and should move on in a day or so. However, it is valuable and if it needs to be removed, it should be left to beekeepers.

Sending out a swarm is the natural way in which honey bee colonies increase their numbers. They are looking for new homes. Honey bees in a swarm are usually very gentle and present very little danger. They can be made aggressive if disturbed or sprayed with water.

As honey bees can no longer survive in the wild, it is important to collect swarms and return them to the care of beekeepers. This year it is even more important to save swarms as there is a shortage of honey bees following the disastrous winter losses in the last couple of years.

A swarm can be put into a bee hive and become a productive colony. Many new beekeepers, and some of the many people who have taken up beekeeping this year, start out with a swarm. We need all the bees we can get. 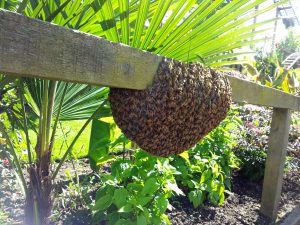 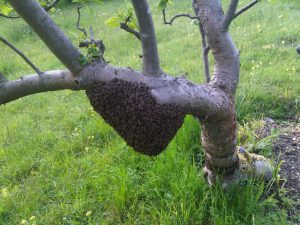 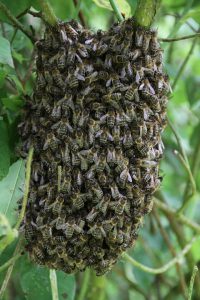 Is a swarm dangerous?

The swarm appears to be very busy and noisy, there is a loud hum and the air is thick with bees. However, the bees are totally focused on finding a new place to live before the food reserve in their stomach is exhausted and do not have the energy for much else.

If I find a swarm what should I do?

If you find a swarm in the early stages of formation with a lot of bees flying about, just keep clear and watch. After about an hour or so the swarm will settle and become almost un-noticeable. During this time, it is clustering to keep warm and conserve energy and sending out ‘scout’ bees to look for a new place to live. Eventually, the swarm will move to its new home, generally within 24-48 hours.

Are honey bees the only insects which swarm?
Yes. Wasps and bumblebees do not swarm. The so called ‘killer bees’ seen in many films DO NOT OCCUR IN THE UK.

Do bees swarm all through the summer?
In general, a hive will swarm once in a year, although some do more frequently. In the UK the swarming season now is April to July with the peak in early May- mid June.

What can the beekeeper do?
Unless access is too dangerous or difficult, beekeepers want to collect swarms, for several reasons. Firstly, a swam can be put back into a beehive and turned into a productive colony, Secondly, swarms may act as a means of transfer of disease between colonies, so collection improves the health of bees in the area. Thirdly, many new beekeepers start out with a swarm.

Can I destroy the swarm myself?
The short answer is DON’T – get help from a beekeeper. In law, there is nothing to prevent you from doing so, provided that you use chemicals that are legal. However, if you do, you will leave behind chemical residues which other honey bees will pick up and take back to properly managed colonies and this will kill them too. Most poisonings of honey bees occur for this reason.

I have bees coming out of a wall, out of the ground, from under a shed and in a compost heap – what are these?

These are likely to be bumble bees or solitary bees. They are harmless and do not swarm. They will die out naturally in the autumn so please leave them alone if you can. Many are becoming very rare. All have value as pollinators.

How do I know if I have a wasps’ nest?
Wasps’ nests are made of a paper-like material, and hang in rough globes in bushes or undisturbed loft spaces, sheds etc. Wasps are always yellow and black. If the nest is a real nuisance, is can be destroyed by a pest controller, but remember wasps are valuable predators of aphids and greenfly, so they have a value to the gardener too.